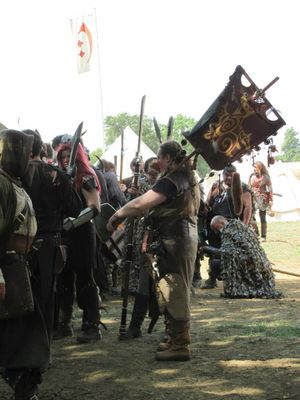 Among warriors that favour mobiity over protection from arrows, the
Thorn's Dance can be the difference between victory and defeat.

A thorn's dance allows the banner bearer to aid their allies by restoring crippled limbs. The banner pole is usually carved of spruce or yew wood, making significantly more flexible than similar standards. The wood is treated with beggar's lye and ambergelt to reinforce these qualities, causing the pole to bend rather than snap. The banner itself tends to present a dark field, with a device picked out in striking, vibrant colour. Among the Navarr, the banner is often edged with entwining briars, the tangling thorns suggesting the way the power of the banner can be used to fuse broken bones and knit torn sinew and flesh together. The banner pole is often marked with the rune of blood, representing physical health, or with the rune of might to symbolise physical strength.

The banner takes its name from the Navarr warriors who first made extensive use of it. Many thorns favour light and medium, prioritizing speed and ease of movement over heavier forms of protection. While aids their ability to outflank and outmaneuvre their enemies, it also leaves them vulnerable to deadly arrows and savage melee attacks. The Thorn's Dance standard can help alleviate some of these problems, especially when it is borne into battle by someone who also possesses training in battlefield medicine.

The magical properties also makes the banner popular among many regiments of Freeborn kohan. There the banner often takes the form of a flag or pair of flags, and rather than the symbolism of thorns and briars they are usually worked with colours and designs suggesting wind, water, and fire. The Freeborn call them Firedance Flags and there is a tradition that the banner bearer be a sutannir who wields the flag in complex swirling motions while supporting the passionate warriors of the Brass Coast.

For similar reasons, the Thorn's Dance also sees use among battlemages who rely on the protection granted by mage armour. In Urizen for example, cadres of elite warrior-magicians may be supported by a version of this banner they term a Red Fountain, often with the stars of astronomantic constellation known as the Fountain picked out subtly on the banner in moonsilver threads.

Archers can also benefit from this banner - the Unconquered, the Bounders, and the yeofolk of Dawn in particular make use of this banner. These archers often favour lighter armour than other soldiers of their nation, but are rendered useless by the loss of a single limb. In all three of these nations it is common to see the image of a hydra worked into the standard somewhere - on the banner itself in Dawn, or coiled around the banner pole in Highguard and the Marches.