Performing this ritual takes at least 2 minutes of roleplaying. This ritual targets a character, who must be present throughout. The target character must have the magician skill.

This enchantment allows the character to make use of a Volhov's Robe three times each day instead of two times each day. All other rules, including the requirement to be bonded to the item, and the restriction against being part of a coven, still apply. 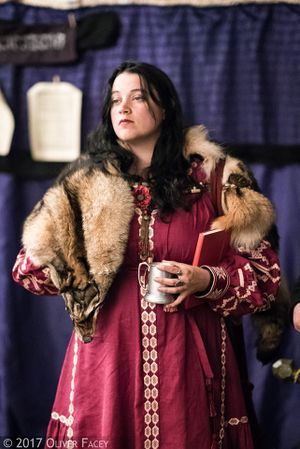 A Volhov's Robe is a potent magic item that allows an independently
-minded magician to contribute to a ritual without needing to swear
a binding coven oath.

This ritual was developed from research performed by the well-known magical theorist Aquillian Effugere, and formulated at the Halls of Knowledge by Provost Octavius. It was entered into Imperial lore by declaration of the Conclave during the Autumn Equinox 381YE.

This utilitarian enchantment subtly alters and reinforces the bond between a magician and a Volhov's Robe, allowing the wearer to use its power an additional time each day. Autumn magic is adept at working subtle changes to magical bonds, and in enhancing the product of mortal artisans. Magicians working to formulate this ritual speculate that similar effects could be created with any number of magic items - using Autumn lore to temper the bonds between the item and the wielder. Unfortunately, each ritual would need to be specifically designed to work with a single magic item, which will likely limit the applications of this research.

It is worth noting that the ritual does not enchant the robe itself. Rather, the magician wearing the robe gains an enhanced ability to draw on the power of the magic item. Comparisons might be drawn between the way the magician gains increased skill, and the way certain other enchantments allow a warrior to use their weapons with greater facility (such as Barked Command of the Iron Serjant).

Interestingly, the magician enchanted with the power of Aid Once More does not actually have to be bonded to a Volhov's Robe at the point the ritual is performed. The ritual is an enchantment after all, that simply provides the recipient with an ability they otherwise would not possess - in this case the ability to draw on the power of a specific magic item more effectively.

While the magician need not actually be bonded to or wearing a Volhov's Robe to gain the benefit of the enchantment, if they are then the robe becomes an obvious focus for the ritual. It might be painted with a special design that is echoed on the body of the magician (for example, a rune on the hand also painted onto the hood). Symbols of binding and bonding are also appropriate - binding the hands of the magician lightly during the ritual only to free them at its climax representing their ability to push beyond the limitations of use normally imposed by a Volhov's Robe.

The ritual may also involve a casting of the create bond spell - either to bind a new Volhov's Robe to the recipient, or to symbolically reinforce and reforge the bonds between magician and magical robe. The ritual is low enough in magnitude that an adept of Autumn lore can be perform it without the aid of a coven; in such cases the magician may wish to enlist the aid of allies to help them don the robe in a ceremonial fashion to draw on the powerful hearth magic of girding.

The rune Hirmok, representing mastery and dominion, has particular resonance with this ritual, but Verys (the rune of strength) or Irremais (the rune of wisdom) might also be appropriate. A blood magician might use a little blood from a respected magician, used to anoint the hands or the robe. A dramaturge is likely to find this ritual has significant resonance with the Witch, and with both the Lantern and the Ring. For the astronomancer, the Chain (representing bonds and connections) and the Phoenix (with its resonance of learning and magical power) are particularly appropriate.

When this ritual was originally formulated, the effects of the enchantment were quite different. It allowed an enchanted magician to contribute to an additional ritual each day. This mechanic was based on a mistake at our end caused by misleading text on the Volhov's Robe. The ability to cooperate to perform rituals is a feature of a coven, not individual characters, and it's not possible to allow individuals to perform additional coven rituals. The ritual as written violated important core game mechanics and introduced irreconcilable problems. We changed it to the current form to get as close to the original intent as possible but keep within the core rules for the game. We have made the modified version part of Imperial lore, but refunded the resources spent on the declaration, and on the original arcane projection.