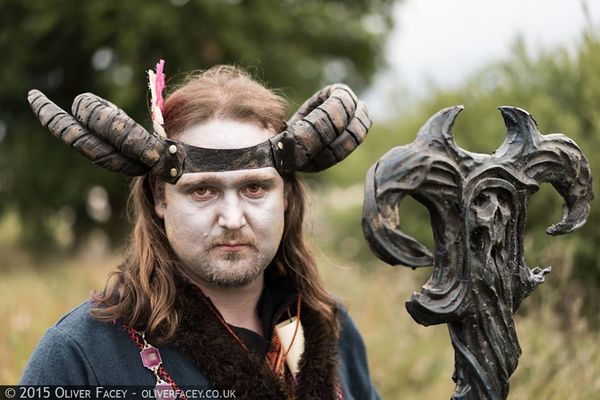 The Enigmatic Staff taps upon the power of the Realm of Night, revealing the inner secrets of ritual magic. These arcane implements are employed throughout the Empire to fortify the abilities of Night ritualists.

Some of these staves are of polished black wood, unobtrusive and discreet as their owners' magic. Others are intentionally bright and showy - the Enigmatic Staff of a guiser or mummer will often be painted in rainbow colours and festooned with bells and baubles and trinkets. In the Brass Coast especially, the staves are of dark wood wrapped with gold or silver - beautiful works of art in their own right - or else blackened and charred from a few too many encounters with open flames symbolising passion and transformation.

As with many such magic items, these staves may be runebound. All four of the so-called runes of night are used: Diras, Wyr, Xun, and Zorech all appear regularly on such staves. One common practice of the Suaq and Kallavesi who make these staves in Wintermark is to include a fifth rune (often Queros or Pallas) somewhere on the staff, the location of the rune being a secret known only to the crafter and the wielder who looks for it.

Alternatively, they may have be decorated with one or more constellations such as the Great Wyrm or the Lock, either inlaid in silver or picked out in deep, lustrous gemstones. Among Urizeni crafters it is a common practice to select a single constellation that resonates strongly with the kind of magic the magician will focus on.

The staff of the Archmage of Night is a version of the Enigmatic Staff crafted to a secret pattern, and grants twice as much power to the wielder. Unlike most such staves, the same physical staves are reforged each year; some of the staves are believed to have developed spontaneous auras as a consequence. There are occasional rumours that the staves exert a subtle influence over the archmages of night, similar to the aura created by the Chamber of Delights ritual.