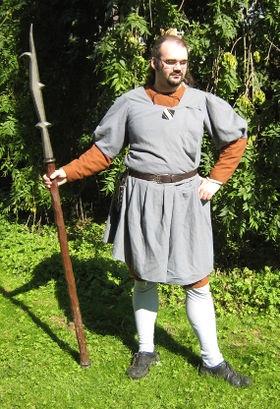 Costume and photo by Costume Mercenary

Sturdy oak and sharp metal alloyed with tiny amounts of green iron; a Farmer's Scythe is testimony to the skill of the artisan who crafts it. These responsive polearms allow the wielder to channel their passion into sweeping blows that unbalance even the most skilled of opponents. They take their name from an early (no doubt apocryphal) anecdote in which a League bravo attempts to intimidate a young Marcher yeoman, likening their bill to a farming implement. In some parts of the Empire, especially in the Marches and the Brass Coast, it is a point of pride to craft these weapons using metal reclaimed from agricultural tools.

These polearms were also developed among the Navarr as enhancements for their iconic barbed spears. They could be made easily whilst travelling thanks to the absence of exotic materials in the design and work well in the brutally practical Navarri style of warfare. Some small teams of thornborn will arm themselves with a mixture of these weapons and Labyrinth's Gates, allowing them to bowl over and dispatch foes quickly, leading to the Navarri name Labyrinth's Keys. Jotra, the Rune of Battle, is most commonly used on these weapons, regardless of their form.

The raider roared in fury as he pounded across the last few yards of ground towards the line, crop stubble crushed under his boots as he swung his axe with a flourish that he knew would drive fear into the hearts of these mere farmer-folk. The dour grey sky overhead echoed with the whoops and yells of his kindred who came in his wake, their blood fired with the promise of victory and plunder.

He grinned with feral joy as the farmers lowered their simple little spears – just implements for harrowing the ground and the crops, remade into pathetic little arrangements of haft and blade. So they had at least the spirit to fight and not to flee, which would make this all the more satisfying.

And then he was on them, boots struggling to keep footing in the rich dirt. He drew the axe back and then, quick as a flash, one of the farmers was on him – that hooked polearm the man clutched in white-knuckled hands whipped out and around his leg and, with a yank, the raider suddenly found himself on the ground, thrashing in the cold mud.

Next came raw, agonising pain as another farmer stabbed a glaive down into the raider's gut, through his innards, pinning him to the ground. He tried to shout and roar his defiance but it came out as a bloodied gasp. The farmer just frowned and twisted the glaive a bit, driving it deeper into the ground as fresh torment spasmed out of the raider's stomach and left him scrabbling with fading strength at the polearm's haft.

His hands just left reddened smears as the farmer leaned down against the glaive.

Alone in his world of pain, the raider didn't pay heed to the noise of the carnage, the shouts and screams that he'd recognise as his own kin and, then, the muddy thudding of retreating boots. The world was getting dark and cold as he finally lost the will to struggle any further, hands gripping the glaive as if embracing it now. The farmer just looked down dispassionately, as if seeing off a slaughtered animal in a pen.

“Bit of a mess.” Another farmer, blood splashed up one arm, mopping his brow.

“Aye, that it is,” the first retorted, finally wrenching his weapon from the barbarian's innards. He glanced up at the dark clouds overhead. “Think there's rain coming.”

“Aye. Best we get the injured back for tending before it falls,” the second Marcher nodded, sparing the fallen raider a last look. “And be getting these buried in the dirt.”