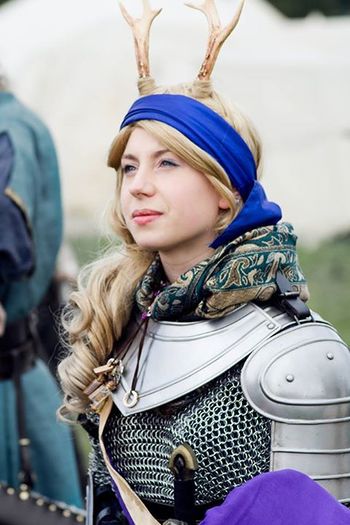 A warrior in Gryphonsoul Aegis is very hard to kill.

Crafting a suit of this armour is a serious undertaking for even a skilled armoursmith, and it is certainly one of the most expensive magic items known to Imperial artisans. It requires a large amount of orichalcum, carefully alloyed with steel and green iron. The metal repeatedly quenched in great baths of beggrar's lye. All this effort focuses and reinforces the irresistible force of the human (or orc) spirit.

The armour is fairly popular in Dawn, and many suits are of Dawnish manufacture. They are often build with the four Gryphon Runes (Tykonus, Verys, Feresh and Jotra), or etched with an image of a gryphon. Some rare suits are constructed with an eagle-head helm and clawed gauntlets and boots, visually capturing the image of the heraldic beast.

In other parts of the Empire, the armour has a variety of other names. In Varushka for example, Schlacta wear heavy Hearthfire Chain and rely the power to see them through the dark winter nights. Both the Freeborn and the Highborn follow a tradition of delicately engraving each scale of the Lionsong Paean with a word, phrase or poetic line invoking strength, Courage or the name of a Paragon or Exemplar.

Crafting a Gryphonsoul Aegis requires eleven ingots of green iron, twenty-one ingots of orichalcum, and nine measures of beggar's lye. It takes one month to make one of these items.

“Damn bandits,” the schlacta said. He didn't sound particularly upset or fearful, which Radomir found strange given that the warrior was slumped on the ground with a sword thrust into his guts. The schlacta's blood was already staining the damp dirt around him; all that heavy armour hadn't done the man much good when Jasna had crept up behind him and slammed her blade through a chink at his waist.

Radomir ignored the fallen warrior's growled irritation and stepped over him; the man would be dead soon enough; he had little blood left in him. Instead the bandit cast his gaze round the little campfire the schlacta had been warming himself at, wary for any other guards here.

But there were none.

Goran shrugged, standing straight from where he was rifling through the schlacta's discarded pack. Over at the edge of the cliff Radomir could see Mila crouched in vigil, frowning down at the village below. When she too shrugged, he relaxed. “Well, I guess they really are that stupid, then. We'll cull them like the sheep they are. Jasna, I want you to-”

He turned to his second in command, but the sharp-featured and light-footed woman wasn't standing any more. The schlacta was somehow back on his feet, and the very sword that Jasna had run him through with was now in his blood-slick grip. The soldier grunted as he pulled its tip out of the fallen woman's side, seemingly hampered little by his own injury.

“So,” said the schlacta affably, “shall we try this again? Three against one is hardly fair odds for you, so I'll let you get a head start if you want to run now.”