"Yes." Hubert's voice was flat. He was not amused.

Hubert rolled his eyes and mentally began to compose a rude limerick about his guest.

As with previous seasons, the night skies over most the Empire (and several adjacent territories including Mournwold, Liathaven, and the Barrens) remain empty of stars. Naga living in those territories are subject to the shroud's peculiar influence ... and as Casinea (the location of Anvil) is still affected, any naga attending the summit will still begin to feel their natural urge toward subtlety and secretiveness is greatly strengthened. (OOC note: players are urged to read the Darkest night wind of fortune from last event to refresh themselves as the details of this effect and bear in mind that the skies directly over Anvil also appear normal for some complicated and subtle reason).

The night skies are clear over Morrow, Spiral, Redoubt, and Skarsind. While the "empty sky" phenomenon has been removed from Zenith as well, Urizen inhabitants report that a Penumbral Veil has recently settled over the territory - no doubt conjured by the Druj invaders. (OOC Note: Naga living in those territories are free of the odd influence ... but obviously coming to the event means they will slowly start to fall under its sway again for the duration of their stay).

Calm After the Storm

The Icy Crag of the Eternal Storm is a college dedicated to the study of Summer magic. In Winter 380YE, just after construction was completed, a rivalry between Cathan Canae and Meraud (eternals of the Summer realm) boiled over, resulting in a terrible supernatural storm that cloaked the college regardless of what the weather was elsewhere, dramatically increasing the costs to run it.

The night after the Summer solstice, the magical storm ended as suddenly as it had blown up. It is believed that the Archmage of Summer negotiated with Cathan Canae to rescind her curse, and that some form of contest will take place to determine who is worthy to be the patron of the college. By all accounts, the Summer eternals are taking this challenge quite seriously. It is likely that whoever wins the right to serve as patron, they will want to put their own stamp on the college, possibly by offering assistance to the Master of the college in researching certain types of ritual.

Regardless of who wins, it is also very likely that after a while one eternal or another will be dissatisfied with the current arrangement, and seek to challenge the current patron again - but at least a method of resolving the issue of who patronizes the college has been established without any further damage to the walls or the faculty! 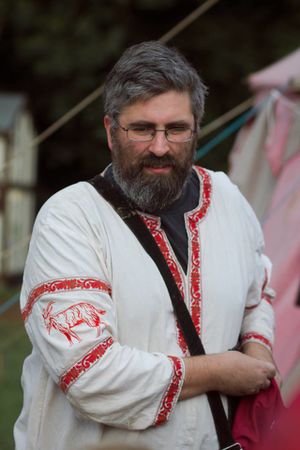 The Empress of all Goats Theatre

A fortnight after the Summer Solstice, a gang of twenty koboldi - the servants of the eternal known in the Empire as King Adamant - arrive in Veresk in Karsk. Their foreman, a slender koboldi with brilliant golden scales, politely informs the bemused boyar and the circle of wise ones that they have been sent by Barien, and request permission to build something they call "The Empress of All Goats Theatre". There is a great deal of confusion, until a sheepish fellow by the name of Hubert Annanovich Gremani admits that he might know something about it all. The koboldi are delighted to see him - it is for Hubert that they have been engaged to perform their building work.

After an evening of fast-talking, the boyar grudgingly gives the koboldi permission to enter. Over the next week, working with the supernatural focus and attention to detail for which they are known, they build a small theatre over the site of Hubert's home (the playwright is forced to take shelter at a nearby Navarr wayhouse as the first act of the little draconic heralds is to demolish his home and garden). On the morning of the eighth day, they deliver a small golden key to Hubert, bow politely, and disappear back whence they came.

Built in a vaguely Temeschwari style, the "The Empress of All Goats Theatre" is apparently Hubert's reward for completing a Challenge the Iron Duke. As news spreads of this magical building, interest grows. Rumour suggests Hubert has already received several enquiries about when the first performance will be, presumably meaning that his retirement will be significantly more eventful than he might have perhaps expected.

Since the eternal Llofir claimed Tamarbode, it has been largely terra incognita for Imperial citizens. The only part of it that remains accessible to Imperial citizens is the mana site known as Tamar's Toes - and those responsible for gathering the mana continue to recount eerie stories of their experiences in the forest there. They talk of being watched by peculiar creatures, of their clothes being infested with unfamiliar rusts and moulds, and of the brooding presence of the supernatural fortress that looms over everything.

The fortification itself is a structure - if such a word is appropriate - worthy of note. It grows at the heart of the Sign of Tamar, completely encompassing the powerful Spring regio there. Its shape does not appear constant - perhaps unsurprising for a castle of living fungus raised by the magic of an eternal. Over the course of each season it ages and changes colour - from a pale bone whiteness at the start of the season to a deep red russet colour at the end - but each Solstice and Equinox it is renewed. It shows no sign of going away.

As before, there is no suggestion that the servants of Llofir have any interest in leaving the magical forest that now fills the region. Both Highborn magisters and Navarr vates in regions bordering Tamarbode agree that whatever else one might say about Llofir, it is interested in the long game.

Magical fortifications are a powerful weapon in the Empire's arsenal. This season, a keep of black ice was raised above Serra Damata in Kahraman. At the same time, a blanket of fog and whispers settled over Grey Fens and Ottermire in Bregasland. All three citadels would have offered aid in resisting any potential invasion of these territories by the Jotun. Fortunately, no such attack materialised, and the castles faded back into the magic from which they had been called.

The Ribbon of Salt is a famous Spring regio sited under the waters off the port-spires of Visten in Redoubt, known for regular eruptions that took the form of a great waterspout. In the weeks leading up to the Spring Equinox, these explosions became unpredictable, and the eruptions themselves were of a shorter duration, but much more intense and destructive in nature. During the Equinox itself, tremors began to emanate from the submarine regio, alarming seers and stargazers alike with the fear that the Ribbon was building up magical energies at an alarming rate. On the last day of the Equinox, the Ribbon of Salt exploded with immense force.

However, rather than an eruption of raw Spring magic the Ribbon vomited forth a swirling torrent of shadows, embers, flame and whispers; a storm of emotions, half-memories, snatches of strange secrets and wreathing mists. A team of heroic Urizeni had traveled to the regio's heart, and realigned it to the realm of Night moments before the detonation.

Even though the influence of the ritual normally fades at sunrise, the energies of the regio do not return to Spring. Scholars who study the Ribbon are at a loss to explain what has happened. Some hypothesise that the recent weakening of Spring regios across the Empire may be to blame, with no easy access to the tumultuous heart of the regio they can do little more than speculate.

Over the months following the Equinox, the regio slowly subsides to the occasional spuming vent of ash and embers. Some of those who live nearby report peculiar dreams and occasional odd phenomena in the water or in the skies, but for the most part the magic appears to have dissipated harmlessly.

Out on the waters of the coast, though, the impact of the Ribbon's eruption is strongest - which is where the Freeborn Storm is this season. The ships of the Brass Coast steer clear of the gout of shadow and fire, but they do not avoid the more subtle influence of the pillar of night magic. It warms the blood and sets the heart aflutter, inflaming passions, inspiring intense and unexpected friendships and bitter feuds with equal facility.

The Admiral of the Freeborn Storm navy, and any character whose fleet was supporting the Imperial navy this season, may decide that their character was exposed to the strange, warm winds and the cold embers emitted from the transformed Ribbon of Salt this season.

Any such character benefits from having an additional hero point (even if they would not normally have hero points) but they also experience a roleplaying effect: you feel all your emotions much more deeply, and experience a strong desire to act. Passivity and caution feel unnatural and wrong; being bold and confronting things head-on feels ultimately fulfilling.

Both the hero point and the roleplaying effect last until the end of the Summer solstice.

Shortly after the Spring Equinox, peculiar eldritch creatures from the realm of Night scuttle out from the shadowy woodlands of Alderly in the Mourn, and out of barrows in the chalk of Freemoor. Scaled and feathered, they bring with them several immense black cauldrons that foam and bubble with vitriolic fluids. Largely ignoring the ongoing war around them, the heralds surround these cauldrons with complex apparatus of iridescent glass and curiously shaped flasks. Then these interlopers prowl among the cold, dead fields where some of the fiercest fighting between Jotun and Empire took place. Where they encounter an unburied corpse, they gather round and carefully harvest the corpse.

The Night heralds only harvest dead orcs, and the occasional Feni. They come with pitchforks, barbed chains and ichor-sodden bags, pulling half-decomposed corpses and limbs to the bubbling cauldrons and dropping them into the miasmatic brew within. They gather up crow-picked bones, listening carefully to them as if in conversation. These heralds do not seem to be interested in just any dead bodies -they are quite selective - though the standards by which they choose which corpse to claim are unclear. Into the cauldrons go the carcases, to be boiled away to nothing but vapours and fluids, distilled into something otherworldly.

The heralds do not touch a single Imperial corpse. They steer well clear of soldiers on both sides. A few are willing to talk, and claim that they are servants to the great eternals Murit and Soghter. They are seeking the fundamental essence of the experience of ending. The cauldrons and alembics are all part of this effort, rendering down the flesh and bones of the dead to catch those brief final moments when life transitions to death. They say that their work is entirely of the body - that it is nothing to do with "ephemera" (presumably they mean souls) - they only catch the echoes of memory still left in the meat. This, they say, is a key part of the creation of the Azoth - though what the Azoth is, they remain hesitant to discuss. Some express a brief disappointment that they are not allowed to take Imperial bodies - such a lack will inevitably shape how the Azoth develops.

Their peculiar, grisly work complete, the heralds steal away with their cauldrons as stealthily as they arrived, leaving only a scattering of circular patches where the black kettles rested where no grass will grow.

Two new rituals enter Imperial Lore: Hammers of the Brilliant Shore (held over from Winter), and the challengingly problematic curse Mountain Remembers Its Youth. Any character who is eligible to master a new ritual can master one of these rituals by the usual means, and they can be cast without being mastered using the normal rules for ritual casting.