The Steel Fist is something of an anomaly in that it does not precisely exist within the Empire at all. The offices of the Steel Fist are located at Crown's Quay in Necropolis, but consist of little more than a neat white-granite building with a discreet sign outside the front door. Regardless, custodianship of the Steel Fist grants an Imperial title; a seat on the Imperial Bourse; and a seasonal bounty of valuable ilium to the Imperial orc who controls it.

In recent years Imperial Orc forces have swelled the ranks of the Imperial armies, tipping the scales against the barbarian threat. Empress Britta enjoyed particularly strong support from the Orcs (both in the first months of her reign and in the military campaigns that preceded it). To recognise that support she helped create the position of the Steel Fist.

The opportunity to create the Steel Fist came in Summer 374YE when representatives of the Sarcophan Delves approached the Empire to discuss certain trading privileges at the Imperial docks. The Imperial Senate at the time was uninterested, but Empress Britta saw the potential and hosted a private negotiation with the ambassadors. The upshot was that the Bedelaar Huisbass of Sarcophan would pay a regular tribute of ilium to the Empire each season, in return for exemption from several trade tariffs and some minor freedoms when operating in the Bay of Catazar. Chief among these was the ability to store small amounts of weirwood, white granite, and mithril in Imperial warehouses. In return, the Sarcophan also continued to endorse the Civil Service Bourse Certificates. Being the Empire's closest neighbours, it is convenient for Sarcophan merchants to meet some of their trading partners on Imperial soil and, as long as they scrupulously observe Imperial law, they are able to do so free from Imperial interference.

The deal concluded, Empress Britta presented it as a fait accompli to the Senate. To reward the Imperial Orcs for the work undertaken in supporting the Imperial armies, the ilium would be allocated to them and connected to a new seat on the Imperial Bourse. There was some grumbling about the agreement, but little open opposition due to a widespread acceptance that the orcs were unstinting in their support for the Empire. The announcement that the Seat would be national, and allocated to whichever legion provided the most assistance to Imperial armies on campaign, did much to quiet dissenting voices in the face of growing aggression from the Jotun, Druj, and Thule.

The Imperial Senate voted to concede the Alvetti estate in Sarvos to the Sarcophan Delves as part of a greater treaty with the Bedelaar Huisbaas Vandersaar. Vandersaar in turn increased the amount of ilium granted to the seat by 4 additional rings per season.

The Steel Fist Accord (the Verdrag van de Stalen Vuist) is due to be renewed in 399YE. Should the Empire ever declare war on the Sarcophan, the Steel Fist is likely to be the first casualty of the ensuing conflict. 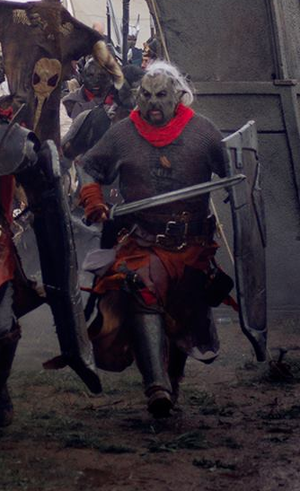 Irontide Kul was appointed to the Seat
during the Spring Equinox 379YE.

The Seat has no particular responsibilities; they simply receive a bounty of ilium which is theirs to do with as they will. If Steel Fist were to be threatened in any way, it would be the responsibility of the Seat to deal with those threats. Likewise, if any particular opportunity were to arise related to Steel Fist, the Seat would expect to be consulted as to how that opportunity might be resolved.

The Seat has control of a source of ilium which they receive directly. They can dispense this resource as they choose. Production is normally 8 rings of ilium every season. The title holder currently recieves a a total of 12 rings while the treaty with the Sarcophan Delves is maintained

As with all ilium Bourse seats, the holder of the title is determined during the Spring Equinox. Control of the Steel Fist is assigned to whichever Imperial Orc candidate receives the most support from Imperial Orc owners of military units that have earned votes over the past year by supporting Imperial armies. Votes are recorded in private in conjunction with the civil servants who support the Bourse.

Custodianship of Steel Fist is retained for a year, or until the citizen holding the seat dies, or steps down. An Imperial Bourse seat cannot be revoked by the Imperial Synod.


Every time an Imperial Orc allocates a military unit to support an Imperial army they receive votes. A typical military unit provides 10 votes, plus an extra 2 votes for each time it has been upgraded. Only the actual rank of the military unit counts in this calculation. Enchantments, curses, penalties or bonuses for downtime effects and so on have no effect. When the seat is appointed, the number of votes they have accrued over the previous year is tallied.

The rituals Conclave of Trees and Shadow, Carve the Crystal Guardian, and Lions of Phoenix Reach offer an opportunity for orcs who do not lead a military unit to participate in the appointment of the seat. Any season during which these rituals are in place, and the magical soldiers summoned are supporting an army, the orc who commands the forest or mana site they are drawn from will receive votes as if they owned a military unit of the same rank.

This title is currently held by Arora; it will be reelected at Spring Equinox 385YE. The table to the right shows the citizens who have been elected to hold this title in the years since Empress Britta died.