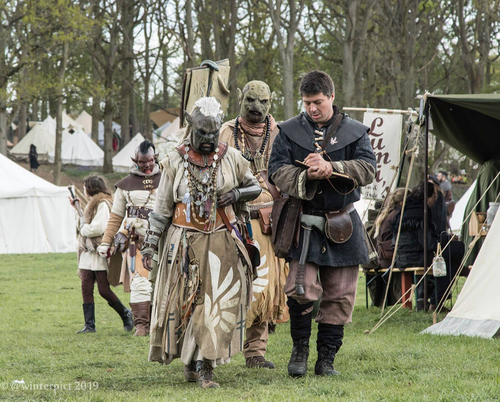 The Day archmage supports Imperial magicians and serves as a diplomat to the Realm of Day.

Each archmage is addressed by their title and the name of the realm of magic they stand for - Gralka, Archmage of Day or Archmage Gancius della Notte di Sarvos of Day. The title archmage comes originally from Urizen, a development of the title mage.

The Archmage of Day is responsible for attending to the magical business of the Conclave, and bears powerful tools to help them do so.. They represent the Empire to the eternals of the Day realm, and vice versa. They also work with magicians versed in the lore of Day magic to expand the Empire's understanding and power in that realm, and employ it to the advantage of Imperial citizens.

The Archmage of Day has the legal powers common to the archmages. They can address the Conclave; accept a formal parley with Day eternals; and advise the magistrates as the recognised master of Day magic.

The archmage of Day may walk a lonely path, balancing the needs of the Empire against the demands of the Day realm.

In common with the other archmages, the Archmage of Day has legal ownership of three powerful magic items that make up the regalia of the archmage. These include the Staff of Day which greatly enhances the bearer's prowess with Day ritual magic; the Silver Chain of Aesh that can reduce the magnitude of a Day ritual; and the Belt of the Phoenix which can allow multiple covens from the same nation to cooperate in the performance of a single Day ritual.

The appointment, replacement, or removal of the Archmage of Day is made by declaration of candidacy as part of a Conclave session. A candidate can be presented for the post of archmage only once a season, and the title can be held by any Imperial citizen.

The Archmage of Day serves until they are replaced by another magician using the declaration of candidacy. As a title in the Conclave, an archmage cannot be revoked.

The Eternals of Day

The Archmage of Day is the Empire's formal representative to the inhabitants of the Day realm, and often serves as a go-between when those eternals wish to communicate with the Empire. Most eternals will treat the archmage as a peer - although that can mean very different things for different eternals. One of the most potent abilities the Archmage of Day possesses is the power of plenipotentiary, allowing them to communicate with eternals from their realm and potentially arranging a parley. A list of previous plenipotentiary results can be found here

Of all the archmages, the Archmage of Day may be said to have the most difficult job when dealing with the eternals. The Day eternals may appear rational and even benevolent, but the wise mortal never forgets that they are dealing with alien intelligence who look at the world very differently. Many eternals have personal philosophies about the way the world should operate, and the Day eternals are no exception and will often attempt to change anyone or anything they interact with to conform to their beliefs. Once one of the Day eternals is committed to a course of action, it is rare for them to change their minds without strong arguments or capitulation from their rivals - as seen during recent problems between the Empire and Kimus when the eternal believed it had been robbed, or in the actions of Ylenrith in kidnapping Imperial citizens to use in "important" investigations into the nature of the spirit.

The Archmage of Day is often in a good position to present declarations of amity and enmity to the Imperial conclave when relations between the Empire and an eternal need to be formalised. Indeed, more than any other Imperial title, the Archmage benefits from staying abreast of the relationships between the inhabitants of the Day realm and Imperial citizens. The current status of the Day eternals with an interest in the Empire can be found here.

This title is currently held by Gralka; it can be reelected at any summit by a declaration of candidacy. The table to the right shows the citizens who have been elected to hold this title in the years since Empress Britta died.