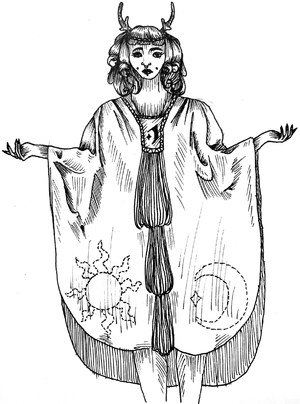 The Bishop's Ensemble in the style of Urizen

The Bishop's Ensemble is a suit of magical clothing infused with a little of the power of the dramaturgical persona of the Bishop. A ritual magician who wears this clothing can draw on the power it contains to empower their ability to perform Day magic. In addition to providing additional magical power, the robes also infuse the wearer with some of the personality of the Bishop.

As the Prince represents temporal power, so the Bishop represents the power of the spiritual realms. The dramaturgical persona represents questions of morality and ethics, and of the motivations that move men and women. The Bishop possesses keen insight and unassailable judgement, and this magical garment is infused with a little of that ethereal potence. In addition, the power woven into the threads of the Bishop's Ensemble strengthens and extends the critical faculties of the wearer, supporting their ability – and will – to offer profound advice to those who need it. A magician girded in the guise of the Bishop will rarely falter in the pursuit of what they know to be right.

A trained ritual magician bonded to the robe can touch the essence of the Bishop and draw on additional strength when working Day magic. With the insight and discernment of the persona enhancing and supporting their own, they can weave much more potent effects either by themselves or as part of a coven.

The garment itself tends to suggest both authority and spirituality. The cloth – woven from fine linen and wool – is repeatedly bleached in vats of beggar's lye until even the tiniest impurity is removed. Moonsilver and sungold threads are used to embroider the outer robe with symbols of spiritual power – often the Labyrinth, the wheel, or iconography of the seven Virtues (especially Wisdom and Vigilance).

While the standard design is clearly patterned after the vestments of the bishops of Tassato and Sarvos, the decorations are carefully chosen to represent the spiritual symbols of the wearer. For example, a Bishop's Ensemble crafted for a Varushkan magician might replace the common iconography with images of the virtuous animals, and substitute a striking crimson cloth for the under-robe. Likewise, a robe woven for an Urizen magician might eschew the symbols of the Way in favour of designs reflecting the imagery of the sun and moon, or an intricate web of seed pearls and weltsilver thread.

House Bourné produces a popular alternate design they have dubbed the Seer's Ensemble. It abandons the more usual gold-and-white colour scheme in favour of a deep blue cloth patterned with curving weltsilver lines reminiscent of sunlight on water – a design that has obvious Asavean influences and has allegedly proved quite popular in the Brass Coast.

Any character can learn how to create this raiment following the normal rules - either by selecting the robe as one of their starting items, or learning it as an extra item pick. The only restriction is that anyone who knows how to make one of these robes must have spent a week or two studying at House Bourné in Sarvos - there is currently no other way to master the patterns which remain the proprietary knowledge of the Bourné guild.
Retrieved from "https://www.profounddecisions.co.uk/mediawiki-public/index.php?title=Bishop%27s_Ensemble&oldid=52180"