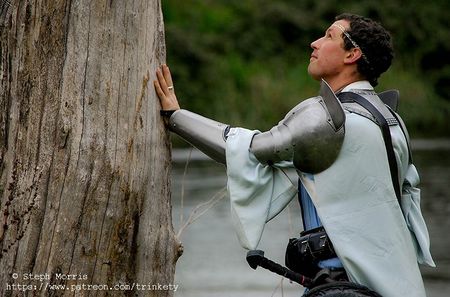 The circlet of falling snow allows a magician to take control of their own tumultuous emotions.

A Circlet of Falling Snow is an intricate piece of work, a pinnacle of the jewelcrafter's arts. Usually made of silver or platinum, and designed with an eye to simplicity of form. They are often decorated with regular geometric designs such as spirals or mazes, intended to serve as meditative foci to soothe the mind and clarify the thoughts of the wearer. While often fashioned as a circlet, it is just as common to see one in the form of a ring or a pendant. Emissaries who deal with the eternals find these items to be useful tools when keeping a clear head, or when cultivating the correct mindset to deal with the complex inhabitants of the Realm of Day. They are very popular in Urizen where they are considered useful in helping to maintain poise; remaining calm allows a magician to channel their emotions into constructive action, rather than being overwhelmed by them.

Though unlikely, questing enchanters of Dawn can be often found in possession of these items which they call Pennants of Pure Heart. They are commonly given as favours to a lover or a true friend so that if they come across malign spiritual presences they remain Loyal to their heart. They often take the form of richly embroidered strips of cloth interwoven with threads of precious metals and mithril depicting a chain linking heraldic symbols.

They are also useful to magician-exorcists, particularly Highborn magisters and some stewards of the dead. The Highborn artisans call them Way Bells and craft them in the form of delicately engraved bells or chimes, worn as pendants.

Isenbrad, Paragon of Wisdom, is a legendary smith said to have been so skilful he was able to craft from ice and snow. Stories suggest that he crafted the first Circlet of Falling Snow to allow him to find his way in the eternal ice-storm Sydanjaa.

These items are often marked with runes such as Irremais, Rune of Wisdom, Cavul, Rune of Purity, or even Hirmok, Rune of Dominion (especially if combined with Zorech, Rune of Passion).

It was strange, Aurora thought, that despite all of the perils of her Test of Ardour, and all she had done to win Guy's hand, the hardest and most frightening part was still standing here in front of his mother. The old Enchantress might have been carved from stone, her face as hard and unyielding as the ancient throne she sat on, her amber wolf's eyes as sharp and hard as the diamonds studding the circlet on her brow.

'It seems you have been successful,' the Enchantress said at last. Aurora caught a glimpse of jagged teeth in her near-lipless mouth. It was strange to see the same features she adored in her fiancé on his mother's face, rearranged into something monstrous. She wondered which bloodline would dominate in her children, if she and Guy ever conceived - whether her daughters would have the old woman's white, furrowed skin, amber eyes - and her malice. 'I cannot confess myself delighted at the prospect of acquiring a changeling as my daughter-in-law. It will not have escaped your notice that House DeVries has strong blood, old blood. Winter blood. We are proud of our ways, and you may not find them to your liking. That said, you have won my son's hand, and also, it would seem, his affections, and have persevered where many others have failed.'

Aurora fought to keep her face expressionless. Many others? She'd be having words with Guy later. Lady DeVries went on.

'At any rate, I have a small gift for you.' On cue, her steward stepped forward, holding a small velvet cushion, on which rested a silver filigreed circlet, wrought into exquisite swirls and lines. Aurora took a halting step forward and reached out her hand to take it. 'Put it on then. Good, it fits. I had concerns about the ears.

'Yes, it is,' the Enchantress said with vulpine satisfaction. 'And knowing my son, you're going to need it.'
Retrieved from "https://www.profounddecisions.co.uk/mediawiki-public/index.php?title=Circlet_of_Falling_Snow&oldid=69786"