The target gains the ability to respond as they wish to any roleplaying effect they are exposed to - but they must sing a stirring song loudly and enthusiastically while they do so.

As long as they are subject to the enchantment, the target also experiences a roleplaying effect: you feel the urge to sing enthusiastically. This becomes an almost overpowering urge to join in when you are around other people who are already singing.

This enchantment is a personal aura, similar to that created using the anointing ceremony. An individual can only be under the effect of one personal aura at a time. This ritual will replace any standard personal aura (including those created by similar rituals), but is not powerful enough to remove a durable personal aura. Likewise, any anointing can replace (or remove) this enchantment. A detect magic spell determines the realm and magnitude of the effect. The insight skill does not detect any spiritual element to the enchantment. 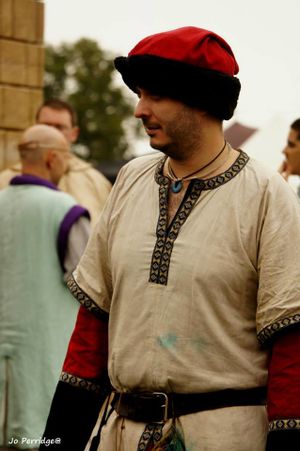 The music of Onni Gidyon Veromaa served as inspiration for this ritual.

This ritual was codified at the Lyceum during Spring 380YE under the guidance of Dean Simargl, the Empty One, of the Circle of Zulgan Tash. It is believed that the ritual takes its name in honour of the late Onni Gidyon Veromaa, a talented stzena from the Circle of Zulgan Tash dedicated to protecting their vale from external threats. It was added to Imperial lore by the Conclave during the Winter 380YE Feast of the Loom - a time which has special significance for the Varushkan people.

There is an undeniable relationship between music and spirituality, between music and passion. Music stirs the soul. A man whistles as he passes a burial ground, gaining confidence. A child sings as she crosses a rickety bridge, taking courage from the music and conquering her fear that something dreadful might lurk beneath. Through the magic of the enchantment created by this ritual, the target is able to empower their will and their spirit with a musical recitation. As the music soars, the target becomes capable of overcoming external influences on their actions.

The relationship between music and heroism is most commonly understood in only one direction. Songs that immortalise or commemorate the actions of the brave, the mighty, the clever and the victorious are as common as songs that mourn the dead, the lost, the fallen. In both cases, the music creates a connection between the one who sings and the events they describe. The singer is girded in the memory of the deeds recounted as surely as if they were donning the armour of the hero they sing of.

The Urizen might say that technical brilliance is required to work magic with music, but the Freeborn at least would surely disagree. Gusto, enthusiasm, passion - the joyous noise dispels the darkness when even the most tone-deaf musician breaks the chains of shame and self-consciousness to raise their voice against fear and despair. Between the notes of the song flows the capacity to choose one's own path.

An important element of using the enchantment is choosing the right song - although it could be argued there are no wrong songs. The ritual grants self-determination and protects from outside influence regardless of what tune is chosen. The only requirement is that the one who is enchanted make music enthusiastically. By raising their voice, they raise the bulwarks of their spirit. They make their soul and their will adamant. They are the champion that holds back the storm with the song of the hearth and the home, they are every warrior who raises their voice in the Battle Anthem as they march to war.

Usually, though, unless one is a scop or stzena, a simple song is best. Something that can be sung instinctively, and whose words and tune are not so complex that they will interfere with the ability to focus on other tasks - especially tasks that will end the aura that oppresses them. Singing is a physical task - the ignorant may underestimate how tiring it can be to keep a song going for a long period of time. When the voice falls silent, the oppressive aura resurges, the haunting spirit returns, the pan of the wound recurs.

A chorus can help the enchanted one - the support of other musicians can help the singer keep their tune alive. For all the power of this magic, brave comrades who will raise their voices alongside the target are worth more than all the technical expertise in the world.

The ritual draws on resonances of confidence and music. As such it is deeply appropriate for the magicians to draw on the Music of the spheres when performing the ritual. Magicians not versed in that esoteric tradition may instead work with their target and any onlookers to create a more straightforward musical performance.

In the simplest form, a hymn, choir, or round might be performed, lead by the magicians and relying on voices raised enthusiastically. In others, musicians may participate as well. It would be deeply appropriate for magicians of the Brass Coats to include energetic dancing as well, while in Wintermark or Dawn loud horns or drums might be particularly resonant.

The target of the ritual should be at the centre of any performance - whether musical or magical. The ritualists may paint or carve the rune Zorech (for passion, a concept often associated with heroic and confident behaviour) onto the target, but Feresh, the Rune of Majesty, has an even stronger resonance. Feresh grants a measure of protection from outside influences, especially those that might cause doubt, confusion, shame, or humility, and in this aspect is often called the Helm.

A fortifying drink, especially a mildly alcoholic beverage, is a suitable component for this ritual. Poured and ceremonially offered to the target, who wets their lips and soothes a throat parched from singing, it is then passed to the other participants. Alternatively, a single vessel might have liquid poured into it by several magicians in turn, representing the spiritual strength and mental fortitude of the group that is finally consumed by the chosen champion.

In dramaturgy, the Captain is the most appropriate persona to evoke, while in Blood magic drops of blood taken from a willing participant known for their musical ability, bravery, or self-confidence may be used instead. A Varushkan may evoke the image of proud creatures such as deer or eagles - coincidentally creatures also associated with the rune Feresh.

The eternal Eleonaris has strong resonance with this ritual, as does the eternal Janon (for all that Janon is a denizen of the Night realm rather than the Summer realm).

For some reason the ritual has an additional resonance with bees. Bees are a Varushkan creature associated with Prosperity, which makes their involvement in this ritual somewhat counter-intuitive. Still, a chorus that accompanies the ritual with droning or humming appears to help the magic flow more easily around the target.