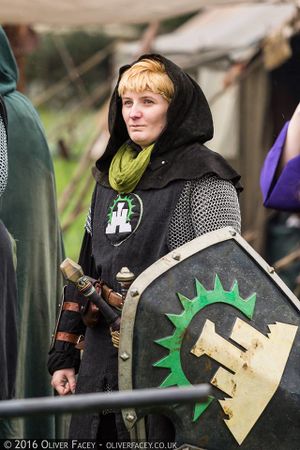 This ritual was codified at the Icy Crag of the Eternal Sun in Miekarova under the guidance of the Highborn Master Luke of the Shattered Tower. The ritual was based on an arcane projection developed in Winter 379YE by the Urizen Ioseph of Phoenix Reach.

As one researcher quipped, the additional difficulties of getting to the Icy Crag – due to the perpetual blizzard laid over the college by the furious Cathan Canae – provides additional impetus to the codification. Varushkan winters are bad enough, but the curse of the Queen of Ice and Darkness is an ever-present reminder of the importance of strong walls.

While much of the power of the ritual is focused on the stone of the fortification, its effect on the defenders should not be overlooked. As many stories of adamant recount, the marvellous material infuses mortals who are exposed to it – and this ritual exploits those stories and that resonance. Living defenders of the enchanted fortification are likewise imbued with the power to resist destruction. In theory, every soldier who is part of the garrison of the enchanted fortification will receive benefits similar to those granted by Strength of the Bull or Splendid Panoply of Knighthood – being able to shrug off mighty blows and continue fighting. They may also become stronger – not only in body but also in will.

There is a very small chance that some of them – especially any with changeling blood or with a strong symbolic connection to the fortification such as the garrison commander – may find that they age slightly more slowly during their time supporting the garrison. This last effect is entirely theoretical – and it would require the ritual to be in effect for a significant period of time with the same garrison to determine if there is any validity to it!

The Nature of Adamant

During the work formulating this ritual a great deal of additional research was performed into the resonance of adamant – not the eternal who commonly goes by the name King Adamant, but the theoretical material of which many structures in the Summer Realm are thought to be composed.

Adamant is a legendary rock, or possibly a mineral, to which many properties are attributed. The adjective adamantine is used to describe something that is so strong as to be impervious to harm. According to some scholars, adamant is a miraculous material found only in the Summer realm which is impossible to work without the most potent magic – its resistance to harm includes resistance to being smelted, or chiselled. Sometimes it is described as a type of stone like white granite, at other times it is an ore similar to silver or iron, and at other times a hard, clear mineral like diamond or tempest jade. It is possible that there are different “kinds” of adamant, or that the material naturally exists in three different states, or that the Summer realm simply uses the same word to refer to three different materials.

According to Knights of the Crossroads, a thick scholarly tome recounting the stories of the many weapons, shields, and suits of armour attributed to the eternal Barien, adamant has only one vulnerability – the mortal realm. In that book, Malcolm of Meade mentioned that several metal items crafted by Barien appeared to be of no earthly material, and were extremely resistant to being damaged by fire or hammer. They could still be broken by sufficient force – but they could be repaired easily and quickly by their wielders. Fortinbras, for example, the greatsword wielded by the Dawnish questing knight Ser George the Bear, gifted to that doughty warrior by Barien as a prize for a successful Challenge of the Iron Duke, was said to cut armoured orcs in half with ease, and on the occasion that a magician or mighty opponent sundered it, Ser George restored it to full strength with a drop of his blood and a roar of righteous anger. Of course, Ser George himself eventually went mad – but the troubadours say it was only after he had seen his beloved family slaughtered by the Druj while he was powerless to intervene. According to those same troubadours, Ser George still hunts Druj in the Barrens, immortal and unkillable on his vengeful rampage – as long as he still wields Fortinbras.

Malcolm theorised that in the mortal realm, adamant becomes breakable but only by the application of will, as well as force. He further theorised that a castle built of adamant stone, or a ring set with an adamant stone, would be utterly impervious to natural harm and the passage of time – that it would maintain its integrity, lustre, sharpness, or any other quality unless a willful being intentionally strove to harm it – and even then it would require a great effort of will to permanently disfigure the adamant item.

There is even some talk of adamant stones – similar to diamonds but with a tinge of blue-white to their clear crystal structure – set into jewellery such as necklaces, rings, or crowns. These stones share their resistant nature with the jewel, and sometimes with the wearer. The Saga of Odrii Svetasson talks about a ring of weltsilver and orichalcum, set with a single stone “from the realm of the Queen” that not only provided him with mastery of the magic of summer (in a manner suggesting it was a Ring of Triumph), but meant that he “aged only during winter, remaining unchanged the rest of the year round”. While some fanciful stories suggest Odrii lived to be nearly 300 years old, actual records suggest he “only” lived to the age of 150 – but that he remained hale and hearty right up until he death in 278YE at the hands of the Thule.

Almost all of this is speculation – there are few enough items that come from the Summer realm and may be composed of adamant in the first place, and few of their owners are likely to wish to see them permanently damaged in pursuit of trivial scholarship.

The Dawnish mason-witch Tria of Laroc did theorise that white granite bears a strong resonance with adamant. She posited in her scroll Unyielding Stone that it was significantly easier to imbue structures built with white granite with the unbreaking potence of adamant than it was to protect anything else in the same manner. She further theorised that the same may be true of weapons, shields, and armour made of orichalcum. Her scroll primarily concerned the development of Unbreakable Spirit, Unbreakable Blades, but it was referenced several times by the magicians working on codifying this ritual.

This ritual targets a fortification, imbuing it with supernatural resilience. A representation of the target fortification, and a map of the territory where it stands are, both suitable foci for the ritual. Ritualists may also wish to use shields or suits of armour as part of the performance – a Captain ordering soldiers to set their shields against attackers would provide a strong dramaturgy element. A Freeborn magician involved in the codification suggested striking shields rhythmically would strengthen the ritual, building on the symbolism of a fortification resisting “blows” from siege engines.

The rune Verys, which represents Strength, has resonance with this ritual, especially when used alongside Jotra, which means Challenge or Struggle. or Tykonus, representing Victory. The Mountain has a key astronomantic link to the ideas of the ritual, but the Oak is probably more thematically appropriate – the great tree that endures storms.

Two Summer eternals – Cathan Canae and King Adamant – have resonance with this ritual, and evoking their names may aid with the performance. A theurgist might evoke the name of famously strong and unyielding paragons or exemplars such as Inga Tarn, but the paragon of Vigilance known as the Sentinel may also be appropriate – the structures they created have famously lasted thousands of years.