The Key and The Lock (Redirected from The Lock)

The Key and The Lock (Redirected from 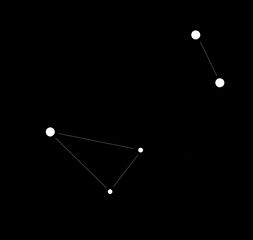 Things Can be Hidden

The Lock is a trio of stars located below the Key. Forming a triangle, its brightest star points in the direction of the constellation of the Door.

The Lock is a powerful symbol in astronomancy signifying seals, secrets, hidden knowledge and control of access. To invoke the Lock can conceal other constellations being invoked; tradition also states that things conducted under these stars will remain hidden from public view.

The Lock is often engraved on doors or on buildings wherein secret meetings occur; in the League this is often painted into the decor of rooms and salons.

Invoking the Lock in magic

In magic the Lock is primarily associated with bars, wards and defensive magics that conceal, prevent access to or deny control over something.

Some ritualists – this is a common tactic in the League and Highguard – use the Lock to conceal or obfuscate a second constellation in the ritual by moving to or closing the ritual under the Lock. Tulpas generated by such rituals tend to be Lock tulpas but with the characteristics of the concealed constellation.

Tulpas of the Lock

Lock tulpas normally manifest themselves as shrouded, veiled or hooded figures, often bearing a resemblance to Highborn ascetics. They move slowly and seldom speak; but often manifest under their concealing robes as an entirely different kind of Tulpa altogether. Opinion is divided among astronomancers as to whether Lock tulpas are true thoughtforms at all or are instead some form of symbiotic shroud used by other tulpas to conceal their nature or motive.

One thoughtform clearly associated with the Lock is the Chained Man, a humanoid figure with a veil and draped in heavy iron chains. Common to the League, they are said to be able to seal any door and lock any chest with a touch such that no magic can open it.

It is believed that alignment with the Lock invokes a strong sense of secrecy and uncommunicativeness. Ritualists may become pensive and silent or may conceal their intent or motives for no apparent reason after a Lock ritual. Because of the intense secrecy associated with the constellation, few ritualists are willing to speak of their experiences under it. 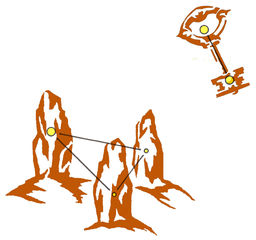 The Key is formed by a pair of twin stars and found almost directly above the Lock. It sits outside the curve where the Great Wyrm passes behind the tail of the Phoenix.

Opener of the ways, standing in opposition to both the Door and the Lock, the Key is a recondite and mystical constellation with considerably more significance than just the opening of things.

The Key symbolises understanding; the key to a code, the key to a secret, the key to a map. Specialist knowledge that must be possessed to make other things clear; hidden wisdom that makes other knowledge manifest. The principles of the Key are that there are no secrets; just levels of understanding that anyone can pursue if they have the will, opportunity and desire.

The Key is the constellation of the Torchbearers; indeed, in Urizen and Highguard the Key is sometimes referred to as the Torch.

Invoking the Key in Magic

The Key is one of the most commonly used astronomantic invocations. Its simplest use is in direct opposition to invocations of the Lock; opening what is sealed, revealing what is hidden, undoing what has been done. But it has subtler and more nuanced uses too.

Scrying rituals or those which seek to uncover secrets or hidden things fall under the aegis of the Key but so do those where prior specialist knowledge is required. Autumn rituals to do with businesses are often invoked under the Key where the ritualist lacks the specialist knowledge required to make a success of a given business – knowledge of good grapes for a vintner, or of where the finest cloth may be purchased for a milliner or tailor.

Tulpas of the Key

One of the most famous thoughtforms of the Key is a being called Revelation – a bald human dressed in white carrying a great ring of keys. It is said the presence of Revelation uncovers secret knowledge and reveals the majesty of the universe to the beholder; it is also said that many who endure the close presence of this tulpa run mad from the experience.

The Key also manifests as birds, especially owls or hunting birds, or as creatures of air and light. It is best to avoid creating a situation where tulpas of the Lock and Key come into contact with one another as they tend to react negatively to each others’ presence.

Ritualists invoking the Key speak of a desire to lay open all of the mysteries of the Universe – to place secrets in the open, to tell everyone your darkest desires and wildest fantasies. This is coupled with a strange euphoria, as if the telling of such things released a terrible burden one did not know one carried.

Many’s the ritualist who has spent the day after a Key ritual apologising to the rest of their coven for the things they said after the rite was concluded.