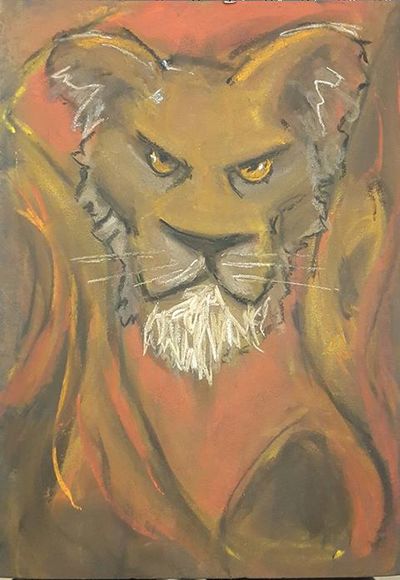 Regal, noble, and terrible in anger; Eleonaris is the Lion of Summer.

Eleonaris has many titles; she is the Queen of the Fields of Glory, the Lady of Pennants, the Commander of the Golden Armies, the Sovereign in Scarlet and Gold and The Lion of Summer.

She has many other names besides; bards and troubadours in her court and beyond compete to glorify her name with flattering titles. She smiles indulgently, but their adoration rarely turns her head.

The Queen of the Fields of Glory appears as a powerful woman in gold and red. She has a golden mane reminiscent of a lion, and her skin is marked with swirling patterns that are said to spiral outwards from her heart. When she is calm these markings are golden, but when she is in a wrathful aspect or going to war, they are deep crimson.

She may be attired in a flowing gown or clad head-to-toe in plate harness. Usually she appears in clothing and armour reminiscent of The Brass Coast, although sometimes she appears as a resplendent Dawnish noble. Very occasionally she may appear in garb that echoes the leaders or nobles of other warrior societies.

Eleonaris is almost never alone; she is generally accompanied by knights, nobles, courtiers, soldiers and servants. Some of these are lesser Eternals, others seem to be more akin to magical creatures in the form of men. Like their mistress, they tend to be fierce and proud. Most bear banners, pennants, tabards or surcotes bearing some sort of image of a golden lion on a red background.

Eleonaris seems to be the ruler of a great swathe of the Summer Realm called the Fields of Glory. She also claims parts of the Forest of Arden, and is known to contend with other Eternals for dominance of other territories. She is said to have a number of lesser Eternals who serve her as vassals - lords and ladies and knights of her court, each of which is responsible for a demesne within her greater Realm. Whether this is 'real' or not is never clear - it is possible that these Eternals simply play at being a feudal court for their own amusement, but if so they take their game so seriously that ignoring it can have serious repercussions.

The Commander in Crimson and Gold exemplifies ideas of nobility, civility, and, conquest. Her armies, resplendent in gold-and-red, fight beneath her leonine pennant in great tourneys, and in open warfare with the armies of other Summer Eternals. She seems to have a great deal of time for those who have earned the respect they are given through war or politics.

As long as records have existed, the Lady of Pennants is closely associated with the eternal Jaheris. He is sometimes her rival, and sometimes her ally. In some stories he is her father who she overthrew to claim her throne, in others he is her son who strives to usurp his mothers' seat. Sometimes it seems he is her beloved consort, but he always plots against her and is cast down. Sometimes he is her brother, who seeks to take her throne by force. In recent years, their relationship appears to have undergone a fundamental shift, and Jaheris has quit the Fields of Glory for the Forest of Arden, which he now rules as his own realm.

The Hawk Lord, Hayaak, driven from the Forest of Arden by Jaheris has sought sanctuary on the Fields of Glory where he no-doubt plans his triumphant return to his former demesne. A shadow of his former self, the exact nature of the relationship between the two eternals is unclear but the presence of a second eternal - even one diminished by exile - on the Fields of Glory must surely be resulting in some confusion.

She is strongly associated with the runes Feresh and Tykonus. 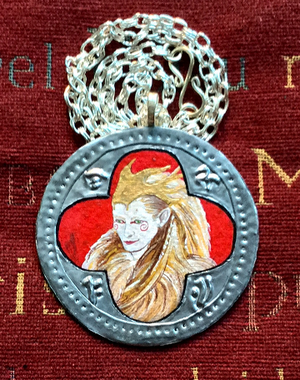 A medallion showing Eleonaris as the Lion of Summer.

During Summer Solstice 378YE, Eleonaris was made subject to the Declaration of Enmity by the Imperial Conclave. This status continued until Winter 378YE when the Declaration of Reconciliation was used to restore her to neutrality, primarily due to the influence of Corvus of the Spire of the Auric Horizon, Archmage of Summer.

Magicians consort with Eleonaris because she is an exemplar of the ideas of war and leadership. She can offer some of her warriors to fight in mortal battles, as well as giving boons that relate to command, majesty and the arts of war. She has a great love of banners, pennants, heraldry, livery and the like and her weavers are known to spin enchanted threads and dyes that can help a mortal artisan or weaver create magical standards of great potence. She is known to love both orichalcum and iridescent gloaming, and gifts made with these materials are sure to get her attention.

Eleonaris offers boons related to battle, leadership and nobility; she does not appreciate the idea of raiding, or of small bands that fight for their own glory - or worse for pay. Those who seek those kinds of boons would be better seeking the court of cold Cathan Canae, the Queen of Ice.

The ritual Knights of Glory draws directly on her power, and she has been known to provide occasional boons related to its performance.

As of the Tourney of Sun and Ice of Autumn 381YE, Eleonaris has been the recognised eternal patron of the Icy Crag of the Eternal Sun, and lays claim to the regio associated with the College of magic. Whether she will offer boons to the Master of Ice and Darkness, and what form those boons may take, is unclear. 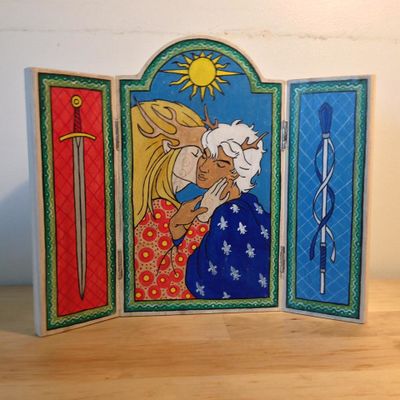 The relationship between Jaheris and Eleonaris is at best a complicated one.