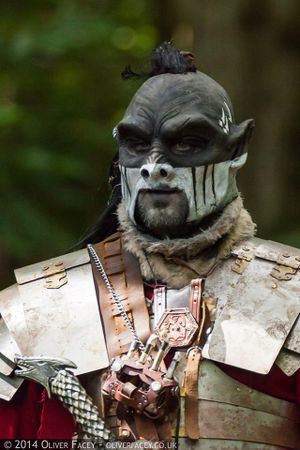 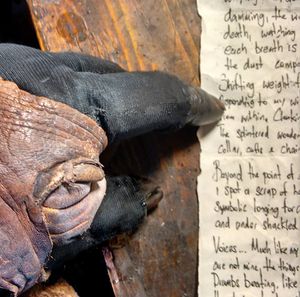 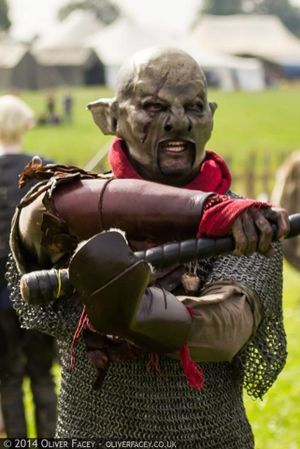 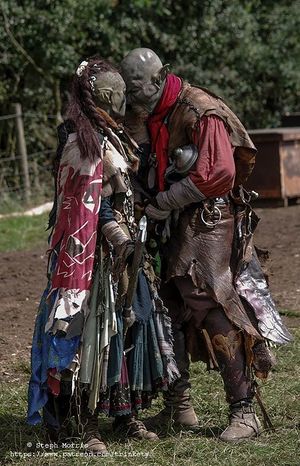 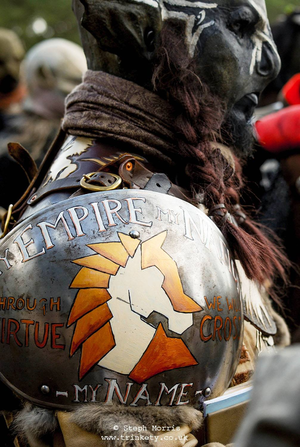 The nation has adopted the Imperial horse as their symbol and usually depict it arrayed in armour for battle. It is common to see it surrounded by chains, another popular symbol for the Imperial Orcs. The chain serves as both a reminder of their history, and a symbol of their loyalty and unity. These images are used to embellish personal equipment and incorporated into banners, insignia, and markers.

Orc symbols are usually added to items by the owner themselves. The simplest are painted or drawn, but more skilled orcs will burn, gild or embroider symbols onto their belongings. Orcs dislike uniformity so symbols are often recurring interpretations of a theme rather than a specific design used by everyone. In a legion of orcs that use a dagger as their symbol for example, each design may be a slightly different shape, size and colour, but provided they make the individual’s legion clearly identifiable then they achieve their purpose. It is the underlying motif that it is prized; the visible demonstration of allegiance.

Orc iconography itself is often stark, hard edged or stylised and almost seems to be an opposite to the extravagant artistry of Dawnish heraldry. It often depicts chains, manacles or other items associated with slavery and hard labour alongside more martial symbols like weapons or armour.

There is always some element of Imperial imagery included in Legion banners, though they are also depicted with a similar martial aspect. For example the horse is generally armoured, the crown mounted on or part of a helm.

The colours used often ape the limited palette of Highguard with red, black and white being popular, as well as occasional use of Imperial gold and purple. However the main body of many Legion and group banners come in a wide range of colours with each one bearing some significance to the individual Legion or group.