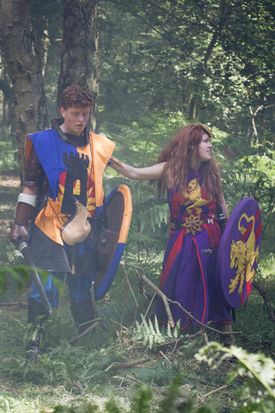 This powerful incantation can defeat death itself.

This powerful spell restores the physical vitality of a target, even one that is on the verge of death. It is equally effective at restoring a scribe who has taken a minor wound, or a hulking ogre who has been critically injured. There seems to be no limit to the ability of this spell to restore someone to full strength. The experience of being healed by magic is highly subjective; some patient describe it as a great burst of vitality that rushes through them like a flood; others as a slow trickle of sensation that begins at the magician's hands and spreads with growing speed throughout their bodies.

The power of this spell is indiscriminate; it cannot be used to partially heal someone (such as a prisoner). Further, it can heal almost anything animate, even things that might otherwise not be considered to be alive in the usual sense - it restores shambling husks and ushabti as efficiently as it restores a human or orc. On the other hand, it is unable to help things that are not animate - while a tree can be considered to be alive, the heal spell has no effect on it.

This is perhaps the most powerful source of emergency healing available in the Empire, but its abilities are strictly delineated. It will not help with a traumatic wound; someone may be fully healed but slowly dying from a ruptured spleen or fractured skull. It will not regenerate a crippled or ruined limb, nor combat poison, venom, curses, weakness or diseases. While magical methods of dealing with all these conditions exist, a magician who wishes to optimise their medicinal capabilities will need to learn additional spells such as restore limb and purify.

Magical healing requires the magician to focus their attention on the patient, and anything that disrupts that attention causes the spell to fail. More than any other regular spell, heal is likely to be cast in dangerous environments, and the magician must take care that neither they nor their target are in immediate danger of having to fight before they begin the spell. A single blow, regardless of who strikes it or is struck, can disrupt the spell forcing the magician to start again. Magicians who anticipate needing to heal allies caught in the middle of an engagement often make reparations to support repeatedly swift casting the spell - although it has a somewhat reduced effect from the regular casting. Others invest in specialist items or enchantments such as a Trollsweave Vest or the Hands of the Healer.

There are several magical items that can enhance or empower the heal spell. They range from simple tools such as Altruist's Recompense wand that lets a magician share in some of the healing they provide, all the way to objects of great power such as the Woundbinder or the Robe of Blood and Bone which can dramatically increase the number of times the spell can be cast in a day.

This spell completely restores all lost hits to a living target. It does not affect a limb that has been affected by a CLEAVE or IMPALE call.

When swift cast, the heal spell restores only 3 hits to the target rather than restoring all their hits

The following are sample vocals you can use to cast this spell if you don't want to make up your own. 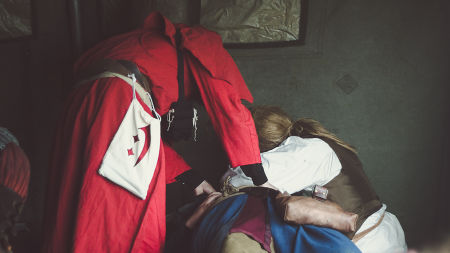 The rune Rhyv is often synonymous with healers.