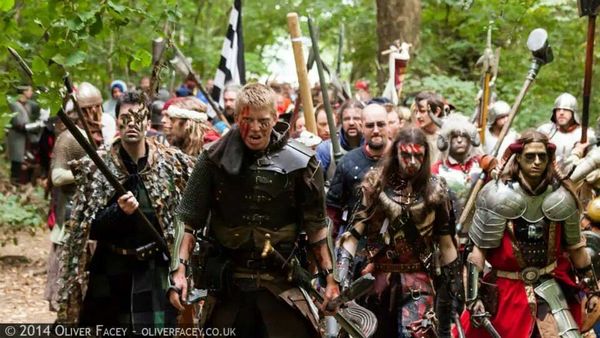 War is not a game.

War is not a game, it is a life-and-death conflict. Most Navarr warriors have little interest in forming battle lines and engaging their enemies in honourable battle. They are pragmatic, and favour war through ambush, skirmish and guile. They disdain heroic charges and single combat with enemy leaders - better to fade back and draw the enemy into a trap than face them in one-on-one combat.

The warriors of the Navarr have two primary areas of interest. They are concerned with the defence of the Steadings and Stridings against bandits and barbarians. They also take responsibility for fighting the forces of the Vallorn. The Vallorn represents a hostile environment, replete with dangerous plants and monstrous insects. These creatures make infrequent incursions into Imperial territory, and the Navarr are at the forefront of driving them back. They also prepare for the day when they will be able to assault their enemy directly, both by scouting the areas of Vallorn influence, and by locating areas that might serve as bases of operation, or recruiting allies to help in the inevitable challenge of defeating the Vallorn's progeny.

Donning warpaint – often embellished with a stylised thorn motif – is an important pre-battle ritual and warrior bands work together to paint each other. By donning warpaint, the Navarr warriors display their commitment to the coming fight. Members of a Steading or Striding will often use similar themes, colours or designs to give themselves a clear battlefield identity as a unit, in the same way that other nations use livery or heraldry.

“You can’t betray your enemies.”

Leather and chain mail are favoured along with the ubiquitous barbed spear, which honours the original spears wielded by the Navarr forebears. Shields, when used, are narrow and fluted, barely wider than the wielder and often heavily decorated with the thorn motif.

Those Navarr who devote themselves specifically to war are called Thorns, who form a professional warrior caste of the Navarr. Like brands, Thorns make an active decision to commit themselves to their chosen course; they literally swear to be ready at all times to fight in the defence of their community. They mark their oath, usually with a tattoo but many also choose to don warpaint each day. This ritual ensures that they remain focussed regardless of where they are. By marking themselves out in this way they make their identity and pledge clear and remind others that they are ready to fight. 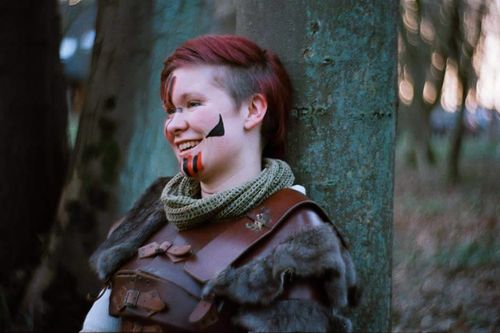 Fight to live, do not live to fight.

The Navarr field two imperial armies; the Black Thorns and the Quiet Step.

The army of the Quiet Step is loosely organised, allowing individual components a certain amount of leeway to operate as they see fit but benefiting from a central logistical core. They were once known for their experienced scouts capable of quickly gathering information about the enemy armies they encounter. They are equally adept at facing barbarian orcs, vallornspawn and Varushkan monsters. Since the Winter Solstice 381Y, however, they refocused their purpose toward more aggressive tactics, employing cunning strategies to confound and slaughter their foes. This shift in emphasis was effected with the assistance of the eternal known as the Spider King - heralds and creatures loyal to Arhallogen sometimes accompany or support the army.

The second Navarr General leads the Quiet Step army, and is appointed (or re-appointed) at the Autumn equinox each year.

The Navarr armies are the only ones who can benefit from the hidden Paths of Lan Thúven in Liathaven - a magically shrouded route that passes through the heart of the vallorn and allows them to treat the regions of West Ranging and Western Scout are adjacent to one another.