The Marches military concerns (Redirected from 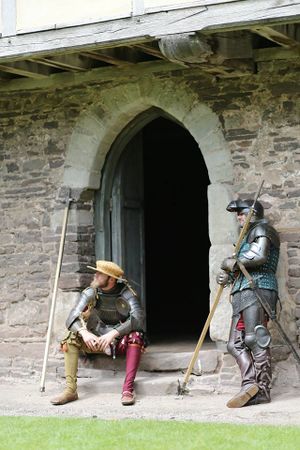 The rich Marcher soil gives rise to great military strength and, after the recent recruitment of The Tusks, four of the Empire's armies come from the Marches. Marcher generals have a reputation for being cautious, and for valuing victory more than personal glory. War is seen as work, hard dirty work, something to achieve over months of effort, not something to be won or lost in a moment. It is also seen as a shared responsibility, something that everyone who can must face together. On campaign, even Marcher generals who can't fight for whatever reason are expected to share the same risks and privations as the common soldier, one yeoman amongst many.

Powerful households field ranks of heavily-armoured yeomen wearing their colours and fighting together. Neighbours well-used to working together fight shoulder to shoulder. The expectation of loyalty and sacrifice can make a Marcher household a fearsomely cohesive force. Traditional rivalries are put to one side when a Marcher army faces a force of outsiders, and folk who would go out of their way to avoid acknowledging each other will fight back to back against a band of invading orcs.

The strength of the Marcher forces is derived from their long hours of toil. Arms hardened by days at the forge, cutting a forest, or threshing grain are strong enough for any fight. It is common for Marchers to wield weapons made from the tools of their labour; bills used for cutting hedges and great hammers used for driving piles are pressed into service of war. The wealthiest may march in a harness of plate but plenty have nothing more than a hard leather tunic or quilted jack they have made themselves. Their true strength is their loyalty and discipline; at their best a Marcher army is a great hedge of steel, moving inexorably forward like a harvest-gang through a field of wheat.

Service to the Empire in one of the Marcher armies is considered an excellent coming of age for the sons and daughters of a yeoman. This offers them a chance to learn a little of the outside world and to earn enough to purchase their own farm and become yeomen themselves. For a nation that prides itself on its military prowess, it also ensures a steady stream of soldiers with practical experience of battle. 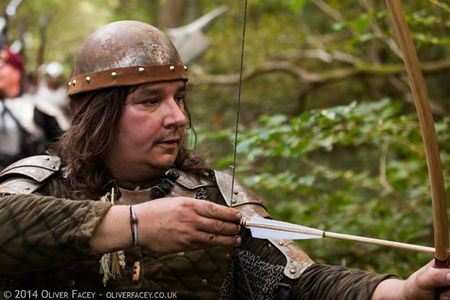 Beaters watch for thieves, vagrants, and other ne'er-do-wells.

Beaters roam through the Marches, learning every part of the land, watching for thieves, vagrants and other ne’er-do-wells. Beaters are often instrumental in settling land disputes between neighbours and they still play a vital role in the tradition of beating the bounds. Beaters often live off the land and most are skilled rangers or hunters. They serve as an informal police force, investigating crimes and tracking criminals. While an individual beater often associates with one or more households, they make no secret of the fact that they maintain an informal network among themselves.

The beaters watch the boundaries and defend them against trespass until its forces can muster. They also remain vigilant for internal threats. In addition to the orcs that still occupy the more inaccessible hills and wild forests of the Marches, there are bands of Féni, the ancient people driven from the fertile lowlands centuries ago. These primitive humans cover their skin in green and yellow tattoos and launch raids against civilised Marchers to steal cattle or crops. If something or someone is raiding out of the forests or hills then the beaters are the ones who are called on to hunt it.

In time of war, beaters serve the Marches as scouts, ranging ahead of the main force. Their experience watching the boundaries of the nation makes them useful light troops, particularly in forested areas, an excellent complement to the heavily armoured yeomen.

The Marches field four imperial armies; the Drakes, the Strong Reeds, the Bounders and The Tusks. There has been some upheaval in the nature of the Marcher armies in recent years, following a careful examination of Marcher values in the wake of the liberation of the Mournwold.

Initially raised from the people of Bregasland, there is still a strong territorial bias in the soldiers of this army. The Strong Reeds is notorious for the dour, stubborn nature of the soldiers who serve under its banner. The Strong Reeds have a long history of resisting Jotun aggression against the marshes, and have several times in their history fought alongside the Wintermark armies in Kallavesa. In recent years they have embraced much older, secretive stratagems, relying on skills honed by years in the fens to perfect the art of scattering into a territory and lay low in appropriate territory.

The second Marcher General leads the Strong Reeds army, and is appointed (or re-appointed) at the Winter solstice each year.

This adaptable army attracts many beaters who support a solid core of Upwold soldiers and a small cadre of dedicated battlefield magicians. They are skilled skirmish fighters, able to quickly learn the lay of the land and relentless in their pursuit of their enemies. Some of the best military archers in the Empire are part of the Bounders adept at bringing down their opponents with a combination of clever placement and withering storms of arrows. They are also adept scouts and trackers - unsurprising perhaps given the number of beaters who serve or have served under their banner. Since the Spring of 383YE, they have focused their efforts on guarding the borders of the Empire.

War is a thrice-ploughed field.

Unlike other generals, the leaders of the Marcher armies are slightly restricted in the orders they can give to their troops. Following the events of the Summer Solstice 381YE, no Marcher general can issue an order to give ground. If they try to do so, it will default to solid defence.

However, as a result of a mandate enacted by Friar John of the Mourn during the Autumn Equinox 382YE, any Marcher army can now issue the defensive order to fight shoulder to shoulder.

Shoulder to Shoulder A general who gives the order to fight shoulder to shoulder relies on the legendary Marcher bill blocks to hold the enemy at bay, while units of archers loose arrows on any that come too close. The goal is not to spill blood, but simply to keep the enemy at bay for as long as possible. By fighting in disciplined ranks, the Marcher army can form an impregnable line that is difficult for any enemy to breach.

The Marcher officer walked out into the middle of the gathered mob, slow and casual, thumbs tucked into his belt. He took a long look around.

“Who here’s got a neighbour they can’t stand?”

The circle of Marchers looked tentatively one to another, a few raised hands and chuckles.

“Quite a few of you, I see. So let me ask you this – raiders come to burn their farm, would you go help them?”

“Course you would, only common sense; they burn that farm this week, could be yours the week after, couldn’t it?”

He pointed at the gaudily dressed Free Company officers swaggering about in the League lines on their flank.

He pointed to the other end of the valley, where thousands of grey-skinned orcs covered the ground like blades of grass on a pasture.

“And those motherless bastards? They’re going to try and burn down our neighbour’s barn.”

“Right then, let’s go pull the idiot neighbour’s arse out of the fire, eh?”