Urizen is not an economic powerhouse. There are a number of mines that produce magical materials, but there is rarely a surplus of anything else and the mountainous terrain makes the transport of bulk goods very difficult. Where they do excel is in the creation of magical implements. The masters of these professions are figures of influence and prestige in Urizen. While they rarely master the Realm Lores, the prevalence of magicians in Urizen means there is a constant demand for wands, staves, rods and ritual accoutrements of all sorts. Further, trinkets, amulets and talismans are popular with all levels of society – they represent tangible pieces of magical power that can mark status and wealth more effectively than any number of jewelled rings or necklaces.

Menial labour in Urizen is mostly performed by arcane constructs called ushabti. These humanoid figures are crafted by artifices from wood and clay, and animated by magical energies. They are unintelligent, unaware, and have no personalities, constructed to perform a handful of simple tasks repetitively. Field ushabti work the small farms, mine ushabti dig and extract ore, and builder ushabti perform construction work and general labour. A group of ushabti is usually overseen by a single person, who gives them their instructions and the small amount of mana they need to function. Ushabti left unsupervised have a tendency to get into trouble due to their virtual inability to react to unexpected situations. Their main value lies in allowing their supervisor to get a lot of menial work done with minimal effort, generally leaving the person free to read, study or practice while keeping one eye on the ushabti.

Ushabti are constructed without facial features. A few Urizen use servant ushabti, distinguished from the labouring ushabti by more delicate construction and usually "humanized" by giving them a clay or porcelain mask to wear. These servants are useful for simple tasks, but getting them to do anything more complex than serving wine or washing dishes tends to require so much supervision that it is rarely practical.

While Ushabti are about as strong as a fit human they are fragile - a single solid blow is usually enough to disrupt the magic that animates them, regardless of attempts to armour their form. They are almost useless on a battlefield; although they are occasionally used to supplement defensive emplacements, they are rarely very effective except in large numbers. They function best in the mountains of Urizen, and are more effective the higher up the mountains they are. Outside the nation, Ushabti break down quickly, are even more unresponsive, and are generally considered fascinating curios rather than a potential replacement for human industry. 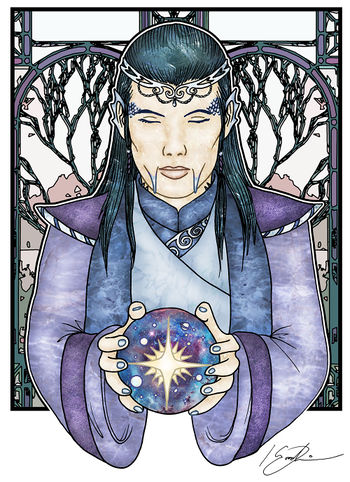 Some Urizen make a study of economics, the way that money moves around and influences the world. These scholars, called architects, see money as a powerful tool for influencing people and changing society for the better. Originally the architects were skilled masons, designing and constructing dwellings for the Urizen people. However the term has come to describe any individual who uses a meticulous approach to look for ways that investment and improvement can make the Empire more successful and effective.

Individual spires sometimes raise funds by performing rituals for payment, for other spires or representatives from other nations. For some spires this is little more than a way to raise funds to pay for mana and materials for their own work. But spires where most of the mages are architects or spires dominated by architects proactively seek to sell their skills in this way. Magic is the most powerful tool for influencing the Net of the Heavens and mages who are architects strive to develop and perform rituals that can enhance the effectiveness of every part of the Empire. Such spires can grow wealthy indeed, if they are skilled at utilising their magical Arete to transform and improve the Empire.

Architects disdain “shopkeepers”, people who buy things and simply wait for customers to purchase from them. Architects seek out individuals who can benefit from the skills or commodities they are selling and convince them to invest their money in whatever service the architect can provide. They make an effort to study the world around them to try to understand what improvements and investments are needed and who is best placed to carry that out. Through investment and mercantile activity they seek to change the world around them.

For many architects, this is nothing more than another expression of the Net of the Heavens, the idea that wealth is simply a tool and that they are seeking out the nodes, the people and moments in the net where wealth can be best employed to produce the most dramatic changes. Of course such opportunities might well yield some of the best profits, but riches are not the primary concern for most architects. The majority are driven by a desire to change the Empire, to strengthen and enrich it, so that it grows ever more perfect. A Merchant Prince of The League might bemoan the actions of a dozen imitators who copied their original idea – whereas a true Urizen architect would be delighted to achieve so much with so little personal effort.