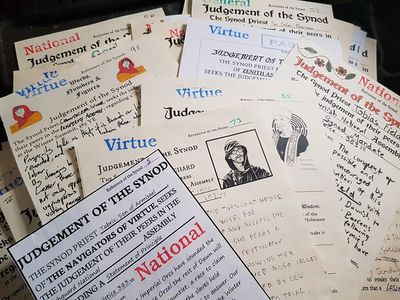 Both conflict and cooperation encompassed by the Synod.

No change of doctrine was proposed during the Winter Solstice summit.

The veto was not sought during the Winter Solstice 383YE.

The following statements of principle were presented to the assemblies of the Imperial Synod. Those statements which achieved a Greater Majority will be distributed to appropriate assemblies.

Some mandates were upheld by their respective assemblies but failed to receive a greater majority. These mandates might have failed due to the intervention of the Wisdom assembly and the sword scholars, but the pilgrimage of spirit encouraged during the Autumn Equinox meant they were enacted regardless. Without the pilgrimage in the name of Imperatrix Lisabetta, judgement 6 (chastise the Wisdom assembly) would have failed to be enacted, as would Judgement 36 (encouraging the Wisdom assembly to continue opposing mandates), Judgement 43 (encourage cooperation in Spiral).

The Synod made the following judgements of excommunication, inquisition, revocation, and sanction.

There were no judgements of recognition during the Winter Solstice.

At the Summit, the following appointments were proposed by the Assemblies of the Synod. You can find the names of citizens who currently hold Imperial titles in the Synod here.

The following judgements of rewarding were proposed during the Winter Solstice.

The following represents the Virtue Fund of the Synod:

Five doses of True Liao were disbursed this summit:

At the start of the summit the voting total of the General Assembly was calculated to be 2848.

The final voting total of the General Assembly was calculated to be 3074.

The Civil Service reminds citizens that determining whether a Judgement has achieved a Greater Majority counts from the estimation of the relevant Assembly strength when scrutiny on the Judgement closes, not the final Assembly strength at the end of the summit.

At the end of the Winter Solstice 383YE Summit, the voting strength of the Virtue and National Assemblies were estimated to be: